Janet Morrison has a thing for plants. There are several in her office, she spends most of her day talking about them, and when she is not in the classroom, she is outdoors working with them. As the resident plant ecologist here at The College of New Jersey, Morrison has even devoted her career to them.

“My interest in plant ecology was a combination of family interests, teachers I liked, and what I was naturally drawn to intellectually,” the Professor of Biology explained. “Simply put, I have an affinity for the plant world.”

Morrison pursued a liberal arts degree in Biology at Oberlin College and in particular sought anything and everything with a field component. “The part of biology that appealed to me was always the part to do with the environment and ecology, the woods, fields, and nature,” she said.

Upon graduation, Morrison tried her hand at a number of different teaching positions in math, science, and environmental education, ranging from private schools to being the “nature person” at summer camps. In time, she realized her calling was at a higher level and decided to attend graduate school. There lay a dilemma: she had too many interests, fueled in a large part from her liberal arts education. Although Women’s Studies and Ethnomusicology were thrown on the table, she based her final decision on what she loved most.

“I realized all my work choices thus far had to do with science, nature, and teaching,” Morrison said. “In my free time, my default activity was to go hiking or exploring in the woods. I wanted to study something that was my strongest passion because the key to a successful future is doing what you love. Plants and nature obviously were what I loved because that’s what I was focused on all the time.”

From that point forward, Morrison dedicated her life to becoming a professional scientist. She obtained her PhD in Ecology and Evolution from State University of New York, Stony Brook, worked as a researcher at The New York Botanical Garden, and then, in 1997, joined the faculty here at TCNJ.

In addition to her courses, which include Ecology and Field Biology, Field Botany and Plant Systematics, Plants and People, and Biological Seminar on the Ecology and Evolution of Disease, Morrison is TCNJ’s Director of Faculty-Student Scholarly and Creative Collaborative Activity. Simply put, she oversees undergraduate research opportunities across campus. The biggest part of the job is running and directing the Mentored Undergraduate Summer Experience (MUSE), but Morrison says it is also one of the most rewarding. The residential MUSE program is 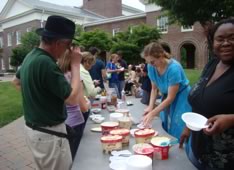 an 8-week, full-immersion experience, with students working full-time on research questions and also participating in a variety of scholarly and community-building activities. The program commences with an orientation, where the scope of the program is introduced, mentors discuss their research interests and projects, and focused discussions within each mentor-student team occur. The orientation also includes an outdoor social event. This approach develops an early sense of community.

Research is an incredibly important learning experience for the student,” she explained. In following a project from beginning to end, you are bringing a topic to a level of fruition above and beyond anything you could do in the classroom.”

So why get involved? “The whole idea with research is creating new knowledge,” said Morrison. “It’s fascinating to follow your nose and understand something no one else has ever understood before, whether it’s in sociology, artistic expression, business or science.”

Morrison says the experience is also invaluable for the faculty mentor.

We all have jobs here at an undergraduate institution because we love the personal connection with students,” she noted. “If you look across the country at all of the best colleges, having strong mentored undergraduate research programs collaboratively with faculty is a centerpiece of their program. As a public school, we are right at the top. It’s quite awesome what we get to do here.” 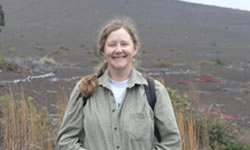 In terms of her own research, Morrison focuses on two areas: the ecology of interactions between plants and diseases in natural populations; and the ecology of non-native invasive plant species. She finds the landscape here at TCNJ to be particularly intriguing given its suburban and exurban nature and the fact it is heavily influenced by human activity.

“We have a huge amount of use by people in building roads, malls, housing developments, colleges, schools, cities, and small towns. As the area has become less agricultural, more parcels of land have reverted to city parks or woodlands,” she explained. “ So if you were to fly over in an airplane, you would see all this patchwork of woods. It is extremely fragmented.”

In terms of her most current research, Morrison says she is poised to begin a six forest-wide manipulative experiment investigating the interaction between the abundance of deer and invasion of non-native species.

“When you walk through a forest, it’s striking how many look a certain way: hardly any native species growing on the forest floor, very little shrub layer, but big, mature trees. If you didn’t know any better, you would think, ‘Oh, this is a nice forest.’”

According to Morrison, what is ‘not nice’ about the forest is the abundance of non-native invasive species which drives a lack of biodiversity.

“The entire Northeastern seaboard, from Boston to D.C., is a large piece of land, but without a big contiguous forest, only forest patches,” she explained. “To understand the basic ecology of that part of the world, it’s all about understanding the suburbanizing forest landscape. I think it’s incredibly driven by deer and invasive species.”

For the past two years, Morrison and her team of undergraduate collaborators have conducted background research, obtained research permits, laid out research plots, and submitted a National Science Foundation grant proposal, which is still pending. The planned experiment will involve six forests in which deer enclosures are built and seeds of invasive species are introduced. Over the course of some years, the investigators will follow what happens to the vegetation with those factors interacting. Preliminary data on deer impacts in these forests has been particularly interesting in terms of examining the amount of cover in the shrub layer, quantifying browsing by deer on woody plants, and counting the number of pellet groups.

When she is not in the classroom or out in the field, Morrison says she spends most of her time enjoying nature, whether it is cross-country skiing in the winter and hiking or biking in the summer. Beyond that, she has two kids, a husband, a house, her flower garden and a dog to keep her busy.

Morrison recommends plant ecology to students who love nature, math, and evolution. “I think it’s a great field for someone who has this unusual combination of interests in nature, but also in highly conceptual science,” she notes. “On top of that, you have to like plants!”