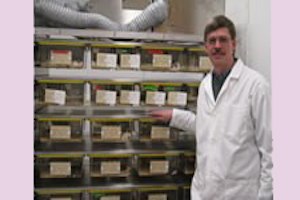 Sudden Infant Death Syndrome (SIDS) claims the lives of more than 2,000 infants each year, making it the leading killer of children under the age of 1. While medical experts can suggest ways to reduce a baby’s risk of dying from SIDS, the etiology of the syndrome remains a mystery.

One leading hypothesis among researchers is that SIDS results when a baby’s protective respiratory responses fail to react to life-threatening environmental stressors that occur during a critical period after birth. Recent evidence indicates that abnormal development of the neuron in the brainstem that makes serotonin contributes to the failure of those protective responses.

To date, there has been no tractable animal model for assessing if or how serotonin defects put infants at risk for SIDS, nor what role environmental stressors play in the process. But the work of Jeffery Erickson, assistant professor of biology, could open new doors in the search for the cause of this silent killer.

Erickson, a respiratory neurobiologist, has been studying the breathing behavior of Pet-1 knockout mice—genetically engineered mice in which the Pet-1 gene has been selectively deleted. This gene is needed for development of a full complement of serotonin neurons in the brain. Consequently, loss of Pet-1 gene function results in a 70-percent deficit of serotonin neurons in the knockout mice.

According to Erickson, these findings indicate that, “The defect [in serotonin] provides susceptibility to sudden early death, but doesn’t mean that death is going to occur.” The key to whether or not an at-risk individual will die may be related to specific environmental stressors it encounters during an early “window of vulnerability,” he said. However, it is not yet known what stressors—in combination with the underlying vulnerability—can trigger sudden death.

So Erickson, assisted by undergraduate research students, began assessing the effects of various environmental stressors—all of which are recognized risk factors for SIDS—on the knockouts. The work is ongoing, but has already yielded some interesting results.

For example, last year, Erickson and Brian Sposato ’08 found that knockouts are less efficient than normal mice at auto-resuscitating following exposure to low oxygen levels. In mammals, auto-resuscitation is a key response that helps an individual recover from a prolonged pause in breathing (apnea). Erickson and Sposato’s findings are potentially important because SIDS researchers have long suspected that a baby’s inability to auto-resuscitate may be a proximate cause of SIDS. Erickson is vigorously following up on the results of that study.

To this end, Samantha Mecker ’09 and Lauren Anllo ’10 worked with Erickson as part of the 2008 Mentored Undergraduate Summer Experience. Mecker studied the effects of nicotine exposure, a major risk factor for SIDS, on auto-resuscitation capability in the knockouts. Anllo assessed the effects of repetitive hypoxia on the knockouts, since previous studies in normal mice have shown that prior exposure to hypoxia negatively impacts the auto-resuscitation response. Mecker and Anllo plan to continue their studies into the upcoming academic year.

Erickson said he is excited about the potential for using the Pet-1 model to explore the underlying basis for SIDS, though he realizes that the conditions that induce the syndrome are likely to be complex. He added that animal models of disease do not always completely recapitulate the human condition.

“At a minimum, though,” he said, “these studies will give us a better understanding of how the brainstem serotonin system influences breathing behavior during early postnatal development. But continued study may also provide important insight into the cause of developmental disorders of breathing such as SIDS”.

Continuing to fully define the breathing abnormalities in the Pet-1 knockouts is an important first step in the research program, Erickson said. However, understanding exactly how the loss of serotonin neurons influences the control breathing and disrupts protective respiratory responses to adverse environmental conditions is even more important. To do this will require a careful comparison of the anatomy and physiology of the portions of the nervous system in Pet-1 knockout and normal mice that are responsible for driving breathing behavior.

The greatest challenge in making that happen might be securing funding. While Erickson has some of the equipment needed to move the research forward, much of it is currently unavailable on campus—and can cost upwards of $150,000. Yet he remains hopeful that he will secure the funding and equipment to move the project into this next critical phase, thus enabling him to advance this important line of research.

“If we can bring any little piece of evidence to bear about why SIDS is occurring, then it gives us the ability to devise strategies to identify and monitor newborns that are at risk, to get them through this critical developmental period,” Erickson said.