For someone who had never handled flies before her post-doctoral position at Princeton University, Amanda Norvell is surprisingly comfortable keeping thousands in the laboratory here at TCNJ.

“I will be totally honest and say I had never touched a fly before I got to the Princeton lab,” the associate professor of biology admits. “About a month in, I was sitting at my microscope trying to figure out something with genetic crosses and I thought to myself, ‘I have a Ph.D. from an Ivy League institution but I have absolutely no idea what these people are talking about.”

In time, of course, the immunologist turned developmental biologist overcame a steep learning curve and recognized her passion for cell biology and fruit flies alike. An important life lesson was also learned, one she makes sure to remind her students each year. “College and graduate school are all about learning how to learn,” Norvell says. “You can master a new concept pretty quickly, but first you have to be confident enough to ask questions.”

“Well, that and go home every night after logging long hours in the lab and read extensively, as in my case,” she adds with a laugh. 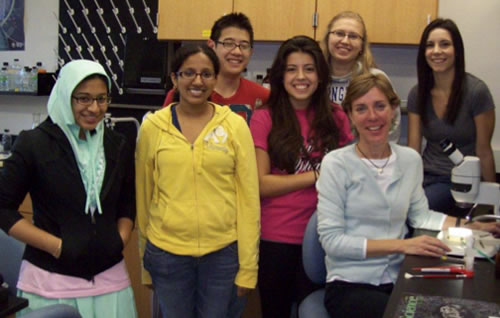 Dr. Norvell ended up in the Princeton post-doctoral program in 1995 after obtaining her undergraduate degree in Microbiology from the University of Massachusetts at Amherst, and then her Ph.D. in Immunology at the University of Pennsylvania. She switched her specialty from immunology to developmental biology because its research and teaching opportunities were more feasible, especially at an undergraduate institution like TCNJ, which is where she set her professorship sights. And as for her organism of choice, the options were limited to flies, worms, or zebra fish. “At the time I was deciding on where to complete my post-doc, Princeton had a concentration of the best developmental biologists in the world. They happened to be working with flies and so I too settled on flies.”

After a stint teaching at Haverford College, Norvell came upon an opening at TCNJ in 2001 and seized the opportunity. “The College of New Jersey was exactly the kind of institution I wanted to teach at: a state college that is predominantly undergraduate, competes at a private school level, and has excellent facilities for research,” she explained. “I believe state-funded education is very important and I’m really thrilled to be here.”

Now in her ninth year as resident eukaryotic cell biologist, Norvell teaches Themes in Biology, Immunology, Biology of the Eukaryotic Cell, Immunology, and Advanced Cell Biology. Fresh from a sabbatical spent researching at Princeton last year, Norvell is back in the laboratory with her students studying oogenesis – the process of egg formation – in Drosophila fruit flies. “We use fruit flies as a model because these are classic genetic organisms: easy to manipulate in terms of costs, life span and observation,” says Norvell. “By studying how they make eggs, we can learn a lot about cell differentiation and the genes that affect that process.”

But the really cool thing, she adds, is that the genes that direct oogenesis in flies also direct the process in humans. Despite what some may think, studying flies is absolutely relevant to what happens in human cells. “Even though you look at a fly and say, ‘Oh, that is so different than me,’ it is actually not,” Norvell explained with a laugh. “Flies have about 14,000 genes and human have about 20,000. We are not that different after all!”

When she is not in the lab or the classroom, Norvell spends her time with her fellow scientist husband and two children. In recent years, she has also re-kindled a passion for running and has competed in several marathons.

In the end, the students and faculty are Norvell’s favorite aspect of TCNJ.

“We have unbelievable facilities for an undergraduate school,” she notes. “But it’s really the people that make this college what it is. My students are fantastic and my colleagues are fantastic, so it’s a joy to come to work everyday.”