From Snakes to Bats to Stickleback Fish: Dr. Matthew Wund, the Evolutionary Biologist

Dr. Matthew Wund is a familiar face in the FedEx Office of Anchorage International Airport. Every summer for the past six years, the assistant professor of biology arrives with a cooler and ships it to Massachusetts. What’s inside? Certainly not the typical Alaskan souvenir, it’s the eggs of stickleback fish destined for his lab at The College of New Jersey.

“I drop them off at FedEx at noon, and by the next morning they arrive at Clark University,” he said, explaining university colleagues care for his “babies” until he returns from Alaska. Soon the fish will join the thousands of other stickleback getting along swimmingly in one of the 100 ten-gallon tanks in his lab in the Biology Building. “It’s a lot of mouths to feed,” he added.

Being an evolutionary biologist, Dr. Wund says, is like never quite growing out of your childhood dinosaur phase.

“What really excited me as a child was the idea that my suburban New Jersey backyard didn’t always look the way it looked,” he recalled. “As long as I can remember, I understood the earth was very, very old. The plants and animals on this planet changed and at one time there were dinosaurs walking through my backyard. I used to look out my bedroom window and imagine what it looked like in the past.”

According to Dr. Wund, lakes just two miles apart in Alaska could have fish that differ in predators, size, mating behavior, coloration and food preferences. “Not only do we have all this diversity, but the marine fish are still in the ocean and so we know what their ancestors looked like,” Dr. Wund said. “Nature has given us the perfect experiment, all this variation to explore and explain.”

Even more advantageous, he said, is the fact their genome has recently been sequenced. This means scientists can start to identify the specific genes responsible for an adaptation.

“Stickleback fish are really the best system to study the genetic basis for adaptation in nature,” he concluded. Though it may be surprising, humans and stickleback fish do share a common ancestor. “What we learn from stickleback can be applied to what we know about ourselves,” said Dr. Wund. “I can’t run an experiment with people from different populations and raise them under different cond itions, but I can do that with fish.” 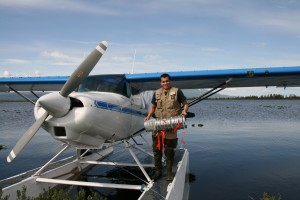 The research he and his students perform in the laboratory is a mix of studying how morphology changes when marine fish colonize fresh water and how fresh water populations cope with introduced predators. “We try to figure out how they learn to recognize predators, and does this learning in fact differ by population,” he explained. “In other words, we study how learning itself evolves, which is a generally applicable question.”

In terms of his scientific purpose, Dr. Wund says he too has evolved over the years. “It started out with this vague sense of ‘I want to run around outside and understand how animals evolved’ into identifying some broad questions in evolution that I wanted to tackle.”

When Dr. Wund joined the faculty in September 2009, it was not his first time in the biology department at The College of New Jersey. “I was a typical TCNJ student. I grew up in New Jersey, got really good grades in high school and wanted a great education at a great price,” he said. After realizing that becoming a college professor was the way to be both a scientist and a teacher, Dr. Wund began to see TCNJ as the model for the kind of institution he’d like to one day join. “I had been hoping to find a place like this, and I did – right back here at TCNJ,” he said.

As an undergraduate, Dr. Wund completed independent research involving kingsnakes with Dr. Howard Reinert. He switched to bats while pursuing his PhD at the University of Michigan, specifically looking into how bats change the types of calls they use in different habitats. It was during his post-doc that Dr. Wund says he had the chance to “stop thinking about being a scientist and actually become one,” noting it was a transformative experience. 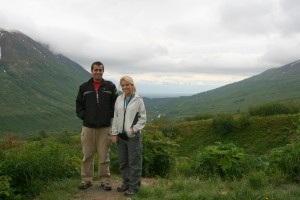 His greatest piece of advice for students advancing to graduate school is to be wary of the learning transition. He says students go from regular course work where professors hand you a syllabus and tell you exactly what you need to do to succeed to a situation where you make your own syllabus for life. “The most important aspect of undergraduate study is not the content of your courses, but learning how to be a good thinker and a problem solver,” he said. “Content is important, but it is really being able to apply what you know, that matters.”

From snakes to bats to stickleback fish, Dr. Wund has chased his love of evolution.

“It became more and more important to me to ask certain kinds of evolutionary questions, rather than to work on some fun animal.” Indeed, he continues, stickleback fish are not nearly as exciting or charismatic as snakes and bats. However they enable him to ask those important questions and, on the bright side, he gets his fill of “adventuring” on those yearly trips to Alaska.

And for the record, Dr. Wund hates eating fish. “It’s because they taste like fish,” he said with a grimace. “But I didn’t eat bats either.”