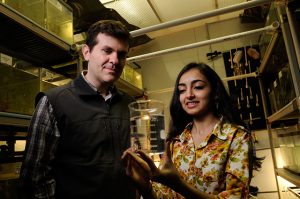 The threespine stickleback, a shiny little fish with spines on its back and belly, is a darling of evolutionary biologists. That’s because it thrives in the ocean, where its ancestor lived, as well as freshwater. But the story of the fish’s adaptation to different environments also hooked a TCNJ student, who has now won a Fulbright Fellowship to study stickleback evolution in Finland.

Krishna Parekh, a biology major who graduated in December, came to college with a plan to continue on to medical school. But in her sophomore year, she asked to volunteer in biology professor Matthew Wund’s research lab, home to 1,000 sticklebacks in 100 tanks. “I wanted to get more involved in research, and thought about what I could do to progress,” she says. “He was really easy to talk to, and very encouraging.” Parekh also knew a bit about fish. While at TCNJ, she had acquired a pet goldfish.

Parekh found she enjoyed research and joined Wund’s lab, where she eventually carried out independent research. Last summer, she spent two weeks collecting stickleback specimens at the University of Anchorage in Alaska with Wund and two other students. “Going to Alaska was pretty cool. I thought, ‘Why not continue this by going abroad?’ I wanted to do research on the molecular side and began looking at opportunities.”

A Google search led her to Erica H. Leder at Finland’s University of Turku, a specialist in the genetics of the stickleback’s adaptation to different environments. After initiating a month-long email conversation with her, Parekh applied for a Fulbright Fellowship. News of her award came March 4. Her research will focus on how the fish’s sperm adapt to various salinities in salt, brackish and fresh water.

The fellowship covers all travel and living costs associated with eight months of study. It begins in September, but Parekh plans to leave in August to maximize her exposure to the Finnish culture and language. “I’ve never even been to Europe. This is an opportunity for me to finally learn another language.”

Meanwhile, she is studying for her MCATs. “We’ll see. I’m just taking things slowly. I used to be all pre-med, but doing research has caused me to ask if I shouldn’t do more of it before I settle down. I just like genetics. We all have DNA, yet the environment affects us.”